It's really hard for me to believe that Ethan is nearly 12 weeks old. He has grown and changed so much. My tiny newborn baby is now over 13 pounds and has such a personality! He knows what he wants and is not easily distracted (makes me nervous for the toddler and preschool years). My coworker described Ethan as not having a medium. He goes from happy to melting down in no time at all. There isn't really any fussing in between. He loves to look out and see what's going on, although has been more inclined to spend some time cuddling his face on our shoulders/chests recently. He LOVES to suck and chew on his hands and arms. He is a drool machine too. He could take or leave the pacifier. We've tried a few kinds and he'll take the Soothies or Gumdrop brands but not consistently. He tolerates tummy time as long as he can lay and suck on his hand while he's there. He does well with lifting his head when he feels like it or when we're motivating him to look at us, a toy, or book. His head control is growing stronger. He still REALLY enjoys "air time", where we let him air out naked. We put a prefold diaper under him in case he decides to poop and put towels all around him because he's guaranteed to pee several times. He kicks, coos, and attempts to roll over. He can get to his side but not quite all the way over yet. He makes me laugh when he pulls his knees up to his belly and puts the bottoms of his feet together. It looks as if he's praying with his feet :) He has been sleeping longer stretches at night. Usually 5-6 hours for the first stretch then anywhere from 2-3 for the second one.

As my maternity leave comes to a close I've been making sure to savor each hug, kiss and smile little longer. Matt keeps reminding me that Ethan is not leaving us forever ... he's just going to daycare 2.5 to 3 days a week. I know this but still feel like we won't have this special time again. The concerns of getting my visits with clients and paperwork done will be weighing on my mind soon.

We seem to be making progress with his food allergies. In one of my last posts I wrote that he was possibly having a reaction to eggs. Our pedi didn't think that it was eggs because Ethan is so young. It could have been a reaction to soy that I was accidentally consuming (or another allergen). It turns out guar gum in the bagels I was questioning is probably derived from soy but xanthan gum is not. Confusing stuff! The pedi was not very helpful. He wanted us to try a hypoallergenic formula. I declined b/c it wasn't going to tell us WHAT Ethan was allergic to. I followed my instinct, did my own research, talked with a Lactation consultant and nurse who have dealt with food allergies about my options. I decided to try an elimination diet for 2 weeks to see if E's symptoms cleared.

Less than a week of no dairy, soy, wheat, eggs, peanuts, tree nuts, or shell fish and Ethan started having some 'normal' diapers!! It took a while to have days of all normal diapers but it happened! We were SO happy.

After 2 weeks on the elimination diet I could re-introduce one allergen. Instead of adding an allergen back into my diet I decided to re-introduce the Tri-Vi-Sol vitamin. It seems to be a newer recommendation by pediatricians to give this vitamin (or other similar ones) to breastfed babies. They have seen cases of Rickett's recently and have determined that breast milk lacks vitamin D. After 2 doses of the Tri-Vi-Sol Ethan had teeny, tiny streaks of blood in his diapers :( I'm stopping the vitamin. I will try a Just D liquid vitamin to see if he has a reaction to that. I want to follow the recommendation for Vitamin D supplement but I do not want to cause digestive issues.

Hopefully we're back on track. 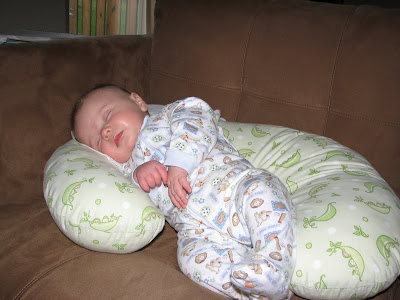 Taking a little nap on the Boppy. This is rare now. He used to fall asleep eating all the time and would stay asleep there. Now he has to either be in his swing, swaddled in his bassinet or sleeping on us. 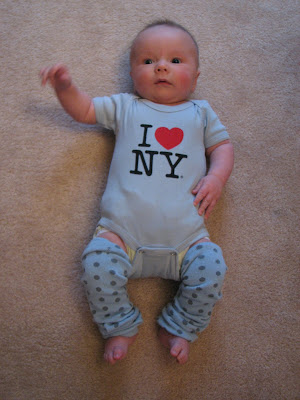 This one is for Jen and Charlene since we chose this onesie for him on our last trip to NYC. I think I was about 24 wks pregnant on that trip. Time has FLOWN by!
Posted by C and M at 7:54 AM

Email ThisBlogThis!Share to TwitterShare to FacebookShare to Pinterest
Labels: baby