Catching up on the allergy front but first a pic- 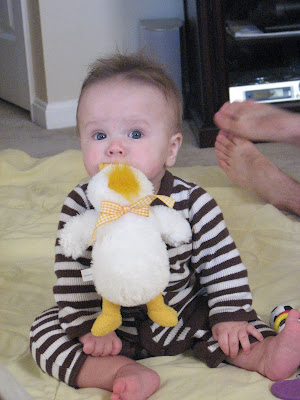 {My grandparents gave him that duck and he LOVES it. It quacks a song and he smiles every single time he hears it.}

When I last updated about allergies I was feeling pretty defeated. I needed a break from focusing on it but that didn't happen. I did divert some of my attention and time to getting my end of the month paperwork done. Time well spent since I'm feeling less stressed.

We spent a weekend cleaning. THOROUGHLY cleaning! We did all the cleaning while Ethan napped or was in another room to prevent reactions from dust/dander being kicked up into that room. We had our carpets professionally cleaned. We had our heat pump serviced and filters changed. We looked into a HEPA filter for our HVAC system but the options were out of our budget. BTW, in a previous post I mentioned reading a suggestion about putting cheesecloth over registers. Our HVAC service company did not think that was a wise choice as it would make the system work unnecessarily harder and could cause damage.

I ordered some Allerpet to hopefully cut down on the dander (thanks SAnon for the rec. I've been thinking about you & hoping that things are going well). We've continued vacuuming often. The cats continue to be confined to half of our upstairs. We do not take Ethan into that part of our home. We wash our hands and change our clothes after petting the cats.

We're on day 4 without Hydroxizine and I can't really be sure if our efforts are making enough of a difference. Ethan is itching and rubbing his eyes. I know that as long as we have the cats then we are going to have more and more dander in our home. They're dander will remain even if they are not here but at least it would stop increasing. We're facing the sad reality that if our efforts are not enough then we may need to find new homes for our girls. It breaks my heart to even think about it but it may be something that we have to do. Others out there might suggest to take the avenue of treatment instead. Personally, I can't continue to medicate my son. It's not just the fact that we are putting medication into his body without knowing the possible long term effects, it's the additional issue the medication is creating - a learned behavior. It is a FIGHT to get the medication in him. He shivers as if he just took the most foul tasting shot. He continues to make a face and shiver for more than a half hour after we finally get it into him. Then he continues to fight you if your hands go near his face. This is troubling when we have to put MORE medication on his cheeks to treat his eczema, which the allergist believes is due to his cat allergy. He reacts the same way when you try to put something in his mouth. This is quite upsetting when he needs to EAT!! So, right now our plan is to wait and see if our efforts are enough and if they aren't we need to find suitable homes for our cats. Again, this is such a difficult decision.

I decided to have myself tested for food allergies and a gluten intolerance. Once I stopped eating the Rice Krispies (that contain gluten) I felt better and Ethan slept a little better!! I've been reading that a mom's leaky gut can cause a child's allergies/intolerances/symptoms. Another page that gives info on leaky gut. Interesting stuff! I don't know if I have a leaky gut. I don't think I have symptoms but I'll be very interested to see if I test positive to any food allergies.

I've been trying some new foods and recipes. Quinoa has been a nice grain addition. It has been helping me eat less rice. I've found cereals made by Erewhon. The Rice Twice and Corn Flakes are favorites. Check out what FEW ingredients there are! I never imagined I'd be eating these cereals. About 2 years ago I was eating Reese's Puff's cereal almost daily. Check out the difference of ingredients. Hard to believe that I actually like my new cereals after eating sugary cereals but I do. I've also used this site for recipes. I love that you can search recipes free of offending allergens. I think the following recipe is from that site too. It turned out to be a spice cake when using cinnamon instead of cocoa. MMM.

1 1/2 C. rice or buckwheat flour
2 heaping Tbs cocoa (I took the suggestion of another baker and used 2 tsp cinnamon instead since I don't know if Ethan would react to cocoa. I eliminated it weeks ago.)
1/4 tsp sea salt
1 tsp baking soda
1 C. sugar (I'll use less next time)
1/2 C. oil (I used olive and it was good)
1 tsp vanilla
1 C. rice milk

YUM!!! Even Matt liked it. I'm anxious to trial cocoa b/c I hear this will taste like brownies. It will be quite a while until we get there though. We have other, more important things to trial before we get to cocoa.
Posted by C and M at 2:40 PM