Although it creates challenges, I'm proud that Ethan is feisty and determined.  I'm also happy that he does have some laid back tendencies (thanks to Matt).  We've been dealing with separation anxiety for months.  I'm currently reading Elizabeth Pantley's No Cry Separation Anxiety Solution.  I learned about separation anxiety in my college courses and techniques on dealing with it through my work with families, but her book has already taught me even more.  We hope her suggested techniques will assist us through this time.  We would like to do whatever we can to make the transitions easier on Ethan and us.  It's heart aching to watch him melt down when he hears the car keys or senses that it's time for Matt or me to leave him.

Ethan cries every day when Matt leaves for work and on the days when I drop him off at school.  The crying and tantrums are short lived and he is able to be redirected but his meltdowns have caused injuries.  He drops to the ground and throws his head to the floor.  Sometimes he'll bang his head into the ground, leaving a red mark that usually clears quickly.  One day Ethan was having a tougher time transitioning and started to tantrum while we were in the bathroom.  He was slamming the bathroom cabinet doors, letting me know that he was not happy about Daddy leaving.  I saw his hand was headed for the bathroom drawer and I went to reach for him but I was too late.  He pulled the drawer out and it landed on his foot.  I'll never forget the look of shock on his face and then his scream.  His foot turned purple and swelled immediately.  I scooped him up and attempted to put an ice pack on it but he kept pushing it off.  He couldn't walk on it.  I try not to joke about this but he looked like he was doing this move from the Karate Kid :)

I called his doctor, just in case.  I really didn't think it was broken.  They scheduled us an appointment for that afternoon.  By the time of his appointment he was beginning to use his injured foot so I was doubting a fracture/break even more.  His doctor sent us for xrays.  I didn't think about the fact that I was pregnant and wouldn't be permitted in the xray room with him.  I had to hand him off to two technicians and listen to him cry for me from the waiting room next door.  They thought they had gotten sufficient pictures of his foot and stated that there were no fractures.  His doctor suggested Motrin for the pain and to try to keep him off of it as much as possible (easier said than done... he's a toddler!).  I sent him to school the next day, sans shoes, and passed the instructions on to his teachers.

Over the next 4 weeks Ethan ran, kicked balls, and continued his other usual activities.  I noticed that he limped occasionally.  I continued inspecting the injured area of his foot and grew concerned that after 4 weeks his foot still had a bump and bruise.  I took him back to the pediatrician who sent us for more xrays.  This time I called Matt to meet us there.  Matt went back with Ethan to have the xrays taken and said that it was difficult to hold Ethan still for them.  I can't imagine how difficult it was for the technicians during the first set of xrays.  The new xrays revealed that Ethan's little foot is in fact fractured!  My poor boy has been walking around with a fractured foot for 4 weeks!  The doctor felt that it appeared to be healing on it's own so it did not need to be in a cast.  We are thankful for that and hope that it continues to heal on it's own.  We were instructed to limit his activity so he hasn't been running around as much.  We'll return to the doctor to have it rechecked in another week. 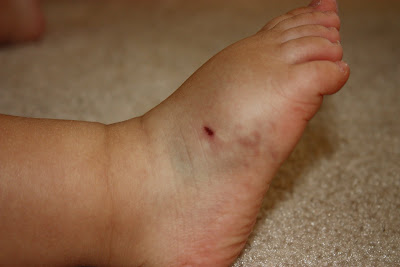 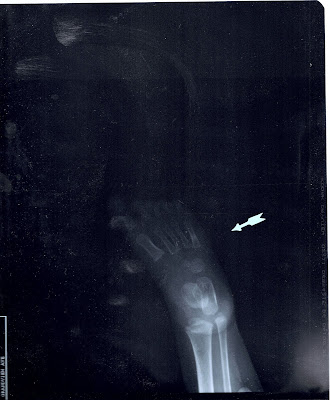 The corner of the drawer caused a little cut too :(

p.s. Today is Ethan's 18 month birthday. This boy has been bringing us joy every single day for 18 months!
Posted by C and M at 8:45 PM