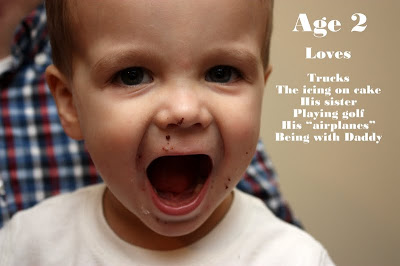 At his 2nd birthday party, with cake and icing on his face - just as it should be when you're 2.
Two!  I can hardly believe it (and at this point he's two and a half)!!

By two years old, Ethan was counting to ten, identifying colors, and shapes.  By two and a half, Ethan counts to twenty, identifies colors beyond primary colors, and more shapes (as we were driving this past Spring he saved me from running a stop sign by saying "there's an octagon!".  He didn't know it meant stop but I'm thankful he recognized the shape!).  His memory amazes us every day.  From recognizing landmarks, knowing which direction to go, memories of events and people, his books, and everything in between.  I can't believe how much his speech has developed in the past few months.  He is forming 9 word sentences, changing present/past tense of words all on his own, and making us laugh with the funny things he says.  I recently overheard him telling Harper "Mommy is freaking out." after I told him that I just needed two seconds to go to the bathroom by myself.  This statement left me in hysterics and he knew it.  He loves to make us laugh.

The love he has for his sister is undeniable.  When she was under 3 months old I told him that Harper had a tough day and was fussy.  He went to her and said "aww, sweetheart".  He liked when she started cooing and would proclaim "she talking to me!".  When she would cry in the car he would tell her "I know baby, I know.".  Eventually when he  was tired of her crying he asked her to "turn off her tears", which is a statement that we have used very successfully with him when he is melting down or having a tantrum.  We ask/tell him to turn off his tears and use his words.  Speaking of tantrums... they still occur but have decreased in frequency.  I think we can attribute his ability to verbally express himself, changes in diet, and consistency at home to the successful decrease in negative behaviors.

Every drive in the car is an adventure to spot dump trucks, tractor-trailers, mowers, diggers, cranes, buses -- you get the idea :)  Ethan loves them all and wants to find more!  He enjoys chatting while we drive... about his day, about what we're going to do next, and all the things we see along the way.

He continues to enjoy music and we have properly exposed (brainwashed) him into liking Pearl Jam.  At first he thought Just Breathe was Pearl Jam.  He only wanted to listen to that song, over and over and over again.  In the car, during nap, and during dinner.  He would ask to listen to Pearl Jam but would say "this is not Pearl Jam" if we put any of their songs on other than Just Breathe.   We love the song but after the 5th time in a row, we were ready for a change.  He also enjoys listening to John Mayer, some country music, and all the songs from the Music Together class that we took.  I highly recommend the class as well.

Ethan has become more cuddly and affectionate lately and I am soaking it up!  He has been using both hands to squeeze our faces as he gives us kisses.  A few weeks ago he proclaimed "I love you, Mommy" and they very well might be the sweetest words I've ever heard.  I know these cuddly moments are fleeting.  He is a boy on the go... racing cars, running, swinging his golf clubs (all of which are broken and duct taped back together, showing how much/hard they are played with).

He loves our routines, talking about our plans for each day, and recalling it all when we share during dinner about how our day was.  Ethan loves coming home and I love how comfortable, confident, and happy home makes him feel.  I can't tell you how happy that makes us feel.
Posted by C and M at 6:19 PM