I'm a slacker. It's been too long.

BOY!
Most importantly, from what they could tell, a HEALTHY baby boy! We've known since 9/3/08 and I'm still in awe that I have a baby boy growing inside of me. Before the ultra sound I was having dreams that we had a little boy without legs. I could see him pulling himself up our stairs. It was so real and it worried me. The ultra sound revealed that he has 2 legs. What a relief! We also learned that he does NOT have a cleft lip!! YAY! Birth defects or not, we will love him unconditionally but no one wants to see their child suffer. I remember the endless teasing about my lip because kids just don't understand and can be mean!

I had my OB appt the following week where she reviewed the results of our ultra sound. Unfortunately, he was in an odd position & was apparently too comfy to move so the sonographer couldn't get all of the measurements of the heart that they need. The doctor doesn't seem too concerned with this because the 4 ventricles of his heart were seen, there are no problems with his heart rate, and what was seen of his heart looked normal. I'm still a little concerned. What also concerns me is that we didn't see his hands, which was also noted in the ultra sound report. Of course after the ultra sound I started having dreams about him not having any hands! We go back for another 3D/4D ultra sound in 3 weeks. I keep praying that he is healthy and has all body parts.

I am excited that we'll get to see him again before his birth. It was so cool. They have a flat screen tv hooked up above so you just lie back and watch in amazement.

Matt was so excited to hear "It's a boy" that he jumped up out of the chair next to me!! It was a great moment. On the way to the ultra sound he said "Well, I'm 60/40". When I asked him what he meant, he responded that he was 60% hoping for a boy and 40% hoping for a girl. I told him that I thought the odds were in his favor because I felt like it was a boy. Once we got back into the car after the ultra sound we kept saying "I can't believe that we're going to have a son!". I already feel an additional bond to this baby since we found out that "it" is a "he". Funny how just knowing what the sex is has increased that bond for me. I think it's because I can start picturing our life with our little boy. I know that I'd feel the same way if we were having a daughter too.

We took the day of our big u/s off of work and I'm so glad that we did. Matt's mother and her husband were in town for the day so we met them to reveal if it was a boy or a girl. This is how we told them: 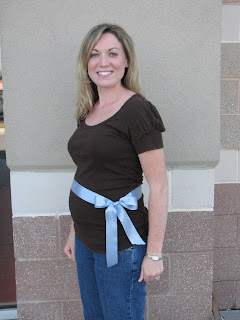 I think she was surprised to find out that she'll have a 5th grandson (no granddaughters yet... maybe someday)! 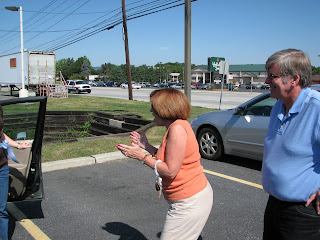 After that Matt and I spent the rest of the day shopping, planning, registering, and talking about what will come. It was the best day!

So happy to be expecting our baby boy: 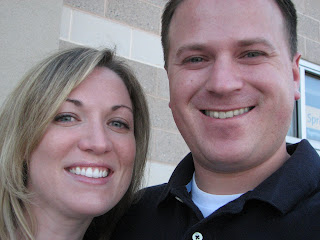